Sometimes your team has to say good-bye to one of the players, to bring in money instantly, to make room for another player, or simply because a player is not right for your team anymore.

A player is always sold to the bank, for a fixed price. The bank then places the player on the transfer market for auction. (It does not matter for how much the player is auctioned, the bank keeps or pays the difference to the price it paid you!)

To sell a player, go to your player overview, select the player, then hit the sell player button.

Before the sale is final, you will be given information about the money you will receive.

Penalties:
Careful. there might be high penalties when you sell a player that is not ready.

This can be youth players that have not been in your team long enough.

A player can also only be sold without a penalty during the last 4 weeks of his contract. 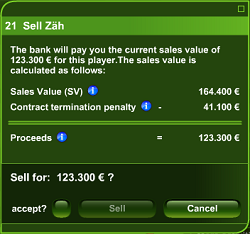 Once you confirm the sale, it cannot be undone, so make sure that you really want to sell him.

Note: You can sell maximum of 25 players within 7 days.