Once you reach career level 25 you will be able to start working with your own youth team. Your youth team always plays in a youth league with the youth teams of the other teams in your professional league. Youth matches follow the same scedule, with the matches being played always 24 hours before your professional team has to hit the field.

To begin the youth work you have to first build the first youth building. Once the construction is completed a new menu button appears under the main menu point 'Team'.

You can always view the youth league table and the match scedule in the regular league overview. 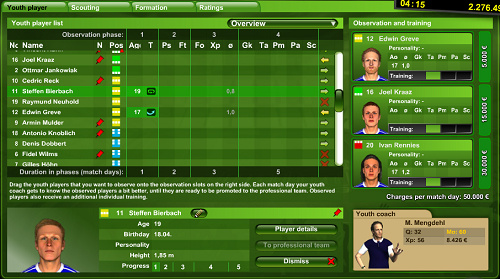 When entering the youth section you will get to your team overview. Your youth team consists of 22 players; 2 goalkeepers, 5 defenders, 5 midfielders, 5 wing players and 5 strikers. It is not possible to have more players, or to change the position distribution.

Other than with your professional players you know only very little about your youth players at the beginning. To be exact, the only thing you do know is the position they play on.

By analysing the player ratings, you will be able to get a general idea about which players might be the stronger ones in your team. And with scouting you are able to find out the players' average strength before you add them to the team.
But besides those pointers you start with few information about your players. To uncover your players' full potential, you need to observe your players through many matches.

Once the first youth buildings has been constructed you can start observing one of your youth players. Building up your youth complex will allow you to observe more players.

To uncover your players' skills and attributes you need to go through several observation phases. Each phase lasts a set number of match days, at the end of which the values are revealed:

This means that will need a total of 14 match days to uncover all skills and attributes including the talent.

If you're not interested in the talent you can promote your own player in 11 games.

Currently you can also purchase the building upgrade "Talent Plus" which allows to determine the talent of a player right with first phase of observation. This first talent slot is also automatically fully trained so it will not only save you time during obversation but also training time later on. Additionally if you also have a Benfica Academy upgrade you will have two talent slots unlocked and fully trained.

Note: If you have Change talent Plus stadium upgrade you will be able to change the talent of a youth player randomly once again.

Hint: The younger a player, the better. A young 17 year old player has a lot of time make up for a slightly lower skill than a 19 year old, so the first phase is particularly intersting.

As in the professional team the form of the players fluctuates.

Generally, your youth team will always play with the same formation, but you decide which of the players get to play, and which ones will sit on the bench. You do this by using the buttons all the way on the left in the player list. Those players that are on the field have boxes filled out in light green, the players that sit on the bench have empty, dark green boxes. Simply select one of the boxes to switch the player's 'playing status' with that of another player. You can only switch with another player on the same position. 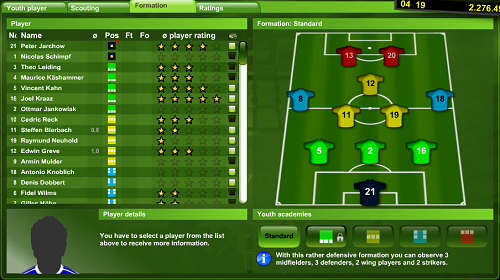 With building upgrades you are able to let your youth team play with different formations. The defensive upgrade for example will allow you to place more than 3 defenders on the field.

Once phase 4 has been completed for a player you can promote the player to the professional team (if you have room in your team of course). Phase 5 is optional.

To promote a player simply select him and check the player details on the bottom. The button 'to professional team' will become clickable when phase 4 has been completed.

Youth players receive an 18-week contract when they join the professional team. Their salary is calculated as 'average strength' * 1000 €. (So, a player with 1.6 average strength will start out with a salary of 1600 € per week.)

Once you hire a youth coach your players receive a balanced training in your youth team. Per observation spot you can also assign one unit of individual training for your youth players. This training is specialized for each player and targets the player's position specifically.

The training effect is always given after the youth league matches have been played. The balanced youth training is a lot weaker than the training in the professional team, so it might be a while until you start seeing the results.

If a player receives all 3 individual training slots he receives a training that is more effective than the traning in the professional team. (With the assistant coach and youth coach being at the same level.)

As in regular league matches the youth players also receive experience from playing in youth matches. Each player on the field received 0.4 experience points.

Youth players can be anywhere from 17 to 19 years old when they join the youth team. Youth players automatically leave the team when they turn 20, unless they completed at least 1 observation phase or if they are still under observation.

They will in any case leave the team once they turn 21, or if the observation is cancelled.

Young players with potential are not only very valuable, they are also something most managers are very proud of and like to show off a bit. To 'honour' your precious youngsters, you can give them nick names.

To do so simply select the player in the list and look at the bottom at the player details. You will see a little 'pen' sign next to the player's name. With the use of a 'nick name' card you will be able to give the player that personal touch he deserves.

Careful: Please make sure that you do NOT use any copyright or otherwise protected names!