With scouting you can take a closer look at up to three potential new players for your youth team to then select the best of the three to join your team. Select the 'Scouting' tab in the youth section to get to the scouting overview.
Here you find a list of all the players that are currently on your dismissal list, a list of recently dismissed players and a list of the latest additions to your youth team. 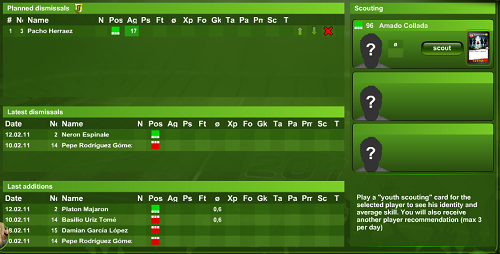 Before you can begin scouting you have to move at least one player to the dismissal list. You can then start looking for the best player to take his spot. If you are looking for a new player for a specific position you have to make sure that you dismiss a youth player on that very same position next to receive fitting candidates. 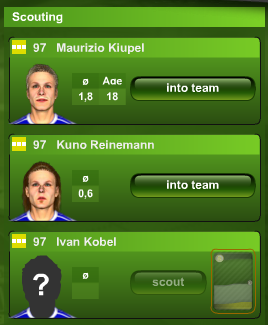 On the right side of the scouting overview you will see the three potential youth players. Scouting will reveal their average strength and by that give you an idea about the potential of the player.

To uncover the player's average strength you will need to play a 'Scout' trading card. Drag the card from your card deck to the designated card slot and click on the 'scout' button. You might have to save your settings before you can do so.

If you are not happy with the result, you can scout two more candidates to find a better one.

There are 3 different scout cards available:

Scouting lets you get an idea about the players' potential, but it will not speed up the actual youth observation process. While the average strength of the players is known, all other values still need to be uncovered through observation in the youth team. The players need to go through all of the observation phases as usual.

By clicking the 'into team' button you instantly dismiss the player on the dismissal list and replace him with the selected player. You will then have to wait until the next day to repeat this procedure. Of course no other player will be dismissed during the next night as only one player per day will be replaced in any case.
If you do not select one of the players to join the youth team right away, then the player on the dismissal list will be dismissed in the next nightly update and the best one of the scouted players is automatically moved into the team.