To see how your youth team has done during the last matches, click on the 'Ratings' tab in the youth section. Here you will get a details match report. (You will always see the match report for the last youth match first. Simply click on the dropdown at the top that shows the current match fixture to select another match.) 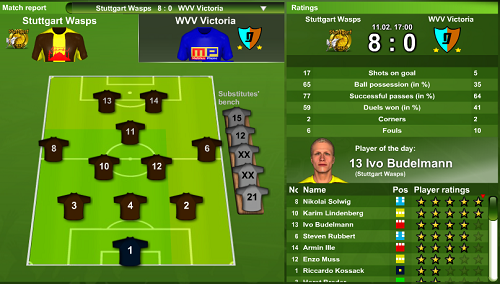 On the left you will see the field with the team's formation. The field's coloration tells you how well the team did in each sector. Green sectors mean that the team was better than the oponent, an orange sector means that the oponent was better.
You can switch between the teams by clicking on the other team's logo on the top left.

On the right side you will see a few match statistics, like the passing and ball possession stats.

The ratings help you determine which of your players are the best, and which ones have very low potential. However, players do have good and bad days, so one rating might not always be enough to be sure. Losing against a strong youth team can sometimes help you get a better view of your team as well. If the players of the other team take up most of the top ratings, then you might be able to get a better idea about your own players.

Over time you will get a feeling for your team. At that point you will be able to judge new players pretty quickly by comparing them to those players in your team from which you know their potential. You can also view each player's average rating in the youth player overview.