Players are bound to your team by contracts.

Balancing the salary expenses is an important part of your financial management. The salary is set at the moment the contract is signed, and it's fixed until the expiration of the contract. The player's demand is bound to three factors:

The formula to calculate the salary is as follows:

The Contract duration factors are as follows:

When a player is sold, the sales value is highly related to the current contract status of the player. There are three different cases:

Alternatively, you can check the icon near the player's SV, in his details: you will see a blue info icon if there are no fees to pay when selling the player, otherwise you will see a red icon.

Plan carefully how to distribute long and short contracts among your players. Players with high potential, which are important for the future of your team, should be bound to the club with long contracts. Players you plan to sell rather soon should receive shorter contracts. Selling a player with an expiring contract might be the choice over renewing the contract if he requires too much money for your finances.

Newly purchased players join the team and automatically receive a 12-week contract that can be extended right away.

Youth players that are promoted to the professional team automatically sign an 18-week contract.

The salary for your promoted youth players is reduced significantly.

The formula is as follows:

2 weeks after its expiration date the player's contract is automatically renewed with an 18-week contract. Due to training and experience gained the new salary can be significantly higher than before! 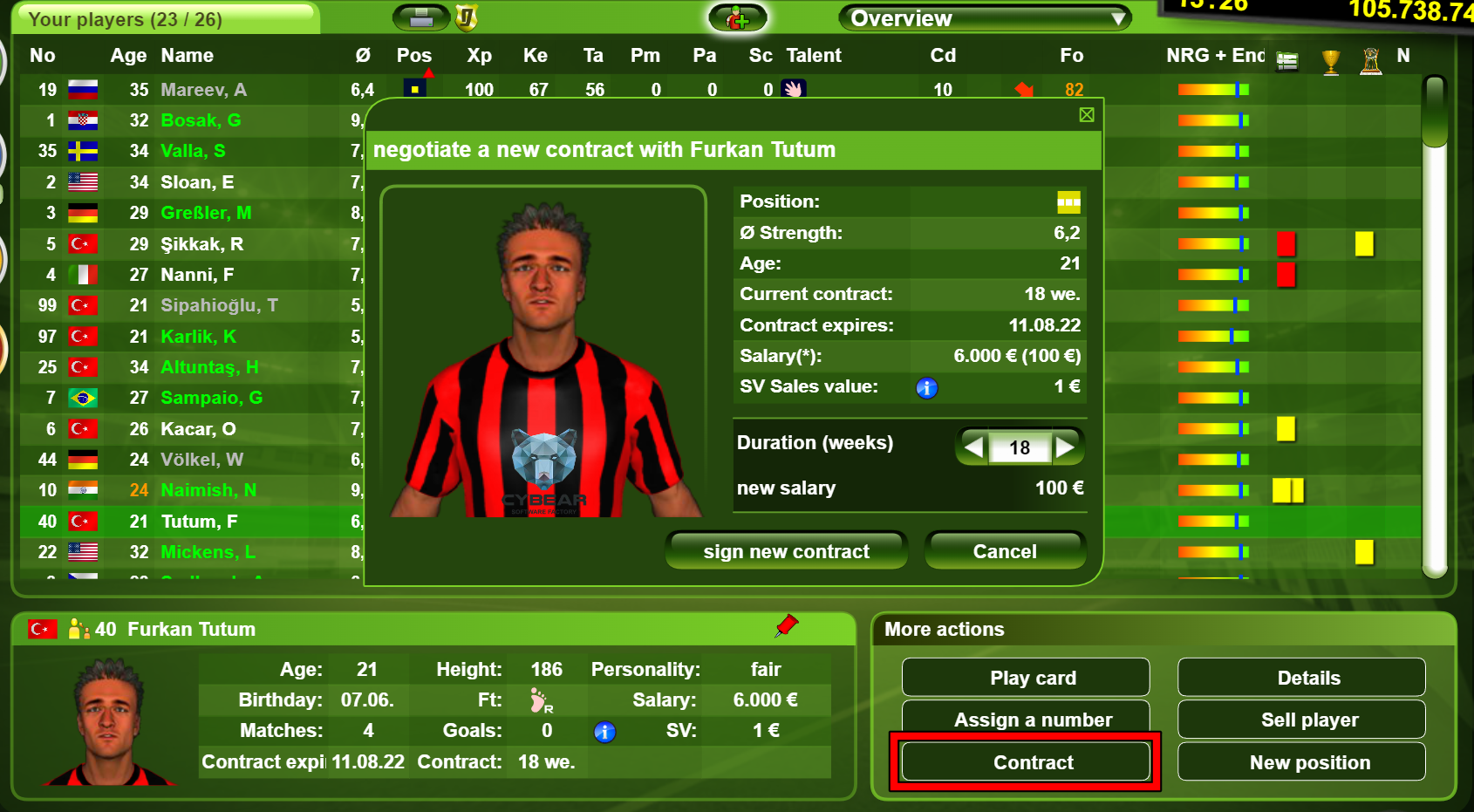 To manually renew a contract, go to "Team" -> "Players", then select a player from the list in the team overview. At the bottom right of the screen click on the "Contract" button. It will open a window with all the economic information of the player:

Select the new contract, then confirm your choice.

With a "Long-term commitment" trading card you can bound your players for many seasons, signing contracts of 40 weeks. To use this card go to "Team" -> "Players". Select a player and click the "Play card" button at the bottom right of the screen. Then drag the "Long-time commitment" card from your deck into the card slot on the right, and confirm the operation. (To play the contract duration card the last contract negotiation has to be at least a week ago unless it is a new player of course.)

Players with a long-term contract are shown with a parchment icon next to the remaining weeks of the contract, in the team overview.

This contract is especially good for players that will experience a big market value increase, like your promoted youth players.