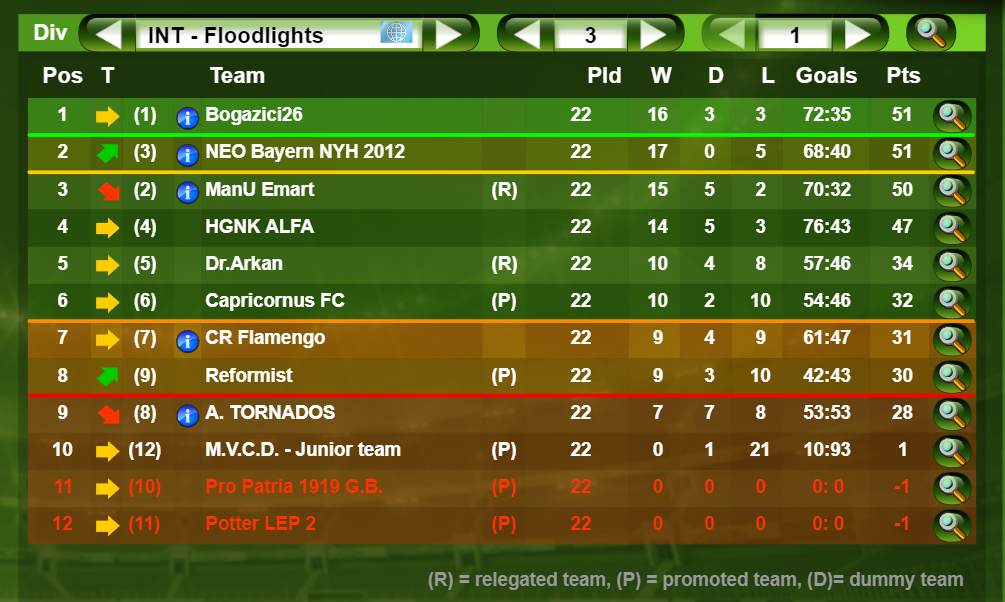 Each country has their own system of leagues, each country can have one or more individual league systems, these are called with special names such as for example DE - Floodlights and DE - Swerve. In this example, it means that there are two league systems in Germany where all clubs compete against each other in their own systems but can still meet in other official competitions such as International Masters or Friendly matches.

There is always only one 1st league. It is then set up like a pyramid, with four leagues for each superior league (up to league 6).

From the 7th layer on there are always 2048 leagues, so there is always one league per superior league.

Every league has 12 teams. The league matches are played in 2 legs. This means, a team plays every other team in its league twice, one home and one away match. Matches are played twice a week on Wednesdays and Saturdays.

-After 22 league matches, all inactive clubs in the league receive -1 point and they are placed at the bottom of the ranking table.

-League champion reward is always paid after the 22nd league match while the promotion reward is paid only after playoff matches or at the latest after the seasonal update is completed.

-Hover over the blue "i" symbol to see more details about that position in the ranking.

-Some season goals relevant for the league competition or your team are checked after the 22nd league match (after daily update) while some other season goals may require playoff matches or seasonal updates to be completed.

-Sponsor bonus per point is only paid for the matches in the league competition. (3x bonus for win, 1x bonus for draw, no bonus for lost match)