In league layers 2-6 the best-ranked team is always promoted immediately.
The second-ranked team of each league has to succeed in a qualification round with 4 teams from their neighbouring leagues and 2 teams from the layer above who fight against relegation in order to get promoted to the next higher layer.

In layer 7, the teams ranked 1st and 2nd are automatically promoted. The third-ranked team of each league has to succeed in a qualification round with 4 teams from their neighbouring leagues and 2 teams from the layer above that fight against relegation to get promoted to the next higher layer.

In the lower league layers (from layer 8) the 4 best-ranked teams of each league are promoted immediately (without qualification).

In league layers 1-6 the teams ranked 9th-12th in each league are relegated to the layer below. In addition to that, the teams ranked 7th and 8th have to play in the qualification to fight against being relegated.

In leagues 7 and below the teams ranked 9th-12th are automatically relegated. No Qualification round is played to avoid relegation

Even if you ended up in the relegation zone, your team still might stay in the current league tier if there aren't enough teams to fill out that league tier. This is decided by random choice and it can't be undone.

There are always 6 teams in each qualification group for all qualification rounds layers 1-6. Two are in danger of being relegated, and 4 with the chance of being promoted.
There are two match days, with the two 'top' teams playing against teams playing for promotion. The 4 promotion-seeking teams have to play one of the two 'top' teams each, and one from the same layer. 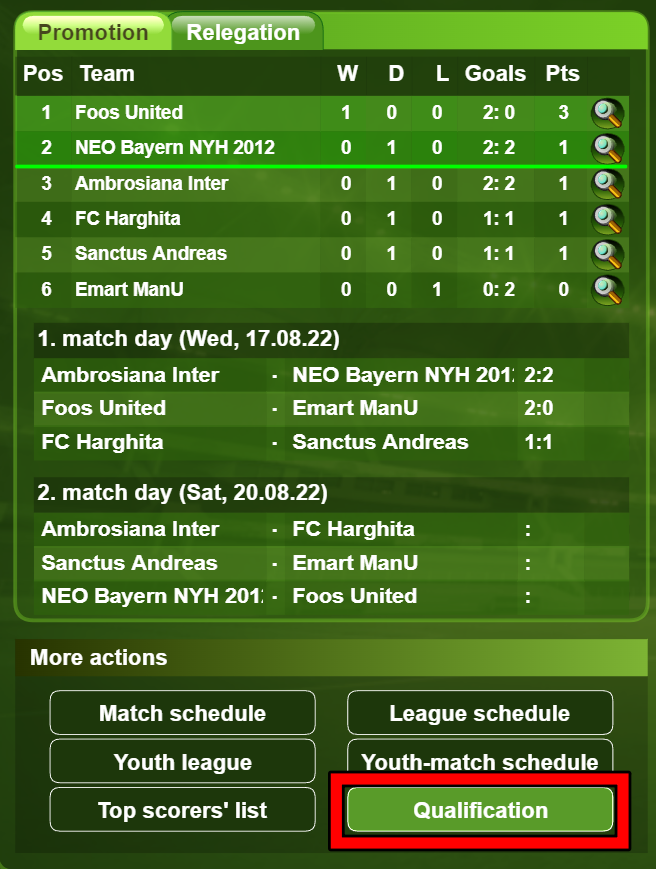 The 7th ranked receives a home advantage in both of its matches, while the 8th ranked team has two away matches. The teams playing for promotion play one home and one away match each.

In the qualification between layers 6 and 7, there are 4 teams per group. There are also 2 match days, with the teams that fight against relegation playing against those fighting for promotion.