During each season there is also the league cup. In this cup all of the teams from one layer are playing against each other in a cup with knock-out-system. (One cup per country)
The clubs from the layers 1-6 play together in one cup. To open your national cup overview go to your official match menu and select the cup tab. 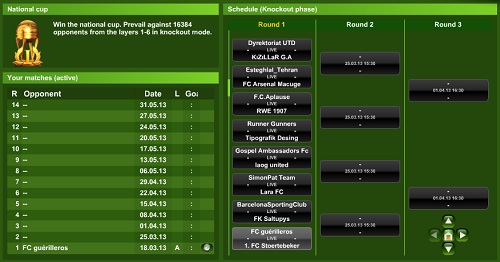 Advancing far into the national cup has a lot of benefits. All ticket revenue is split between the teams, so you can achieve signicant earnings. Your players will also receive 0.6 experience points per match which is 1.5 times more than in a regular league match.